Start a Wiki
"Nervous" Nick Cramer started off as an intern one year after Ben did. Nick, Ben and Jose were all in the same class as high school. Nick is known for his Christianity views, and famously avoids swearing. He's also notorious for breaking stuff and trolling in video games. He's an 'old school gamer who missed out', really getting into video games at the time of the Nintendo 64, and slowly worked back from there once he was working at ScrewAttack and started work on the Video Game Vault and Top 10 series.

Alongside Chad, Nick is a fond fan of Rare's classic games, with some of his favorite games being Banjo Kazooie and Killer Instinct.

Nick arrived at ScrewAttack in 2008. A year after classmates Ben and Jose.

While working at ScrewAttack, Nick studied at UNT and graduated in Radio, Television and Film[1]. This led to a long period during 2011-2012 where Nick was absent for a period of time while he completed his studies.

In 2015, Nick participated at APEX, and finished in the top 8 in Killer Instinct.

In late 2018, he announced on Twitter that he and Top 10 will be moving over to RoosterTeeth's news division, The Know.[2]

Nick was laid off from RoosterTeeth along with 50 other people in September 2019.[3]

Nick has always been a content producer at ScrewAttack. He has voiced and edited many Top 10's and Video Game Vaults. He also spent several years directing and editing the Clip of the Week. Recently, he has become a third researcher for Death Battle.

Starting off as a joke to get Nick into a furry convention, the Tommy the Toucan character has become a crazy alter ego to Nick. He is easily angered as is a bad role model. He also has little co-ordination of his hands - or beak.

Shows he has worked on Edit 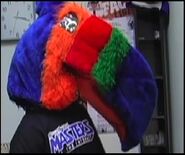 Add a photo to this gallery

Retrieved from "https://screwattack.fandom.com/wiki/Nick_Cramer?oldid=16570"
Community content is available under CC-BY-SA unless otherwise noted.